Ever since the Nyons AOP appellation was created, only the Tanche olive variety has been produced there.

The Nyons AOP (Protected Designation of Origin) at a glance:

• 53 municipalities (35 in the south of the Drôme department, and 18 in northern Vaucluse).
The heart of the production area is seven municipalities where 60% of the olive groves are situated: Nyons, Buis-les-Baronnies, Mirabel-aux-Baronnies, La-Roche-sur-le-Buis, Venterol, Vinsobres and Piégon.
• 220 000 olive trees cultivated (in 2019)
• 1,000 hectares devoted to olive growing (in 2019)
• 42% of the olive trees are located in a “mountainous” area > 2,700 hours of sunshine a year
• The Nyons AOP stakeholders (in 2019):
700 olive producers
1 cooperative
8 artisan millers / 3 private mills
6 artisan table-olive producers / 60 private table-olive producers
• Nyons AOP average production per year: 300 tonnes of Nyons black olives et 250 tonnes of Nyons olive oil

Nyons AOP (Protected Designation of Origin)
Find out more about the Nyons AOP (in French) www.nyons-aoc.com

The grove is in the easternmost part of the municipality of Visan, on a high-lying, southeast-facing hillside at 400 metres altitude. The plot is adjacent to our vines in the neighbouring municipality of Saint-Maurice-sur-Eygues. Our olive trees were planted in 1957 by Monsieur Combes. The big freeze of 1956 killed off most of the olive trees in the area, and many farmers decided to plant olive trees in new plots to save this farming activity, which dates back thousands of years.

Mr Combes then sold his plot to Mr Bérard in the late 1960s, so that he could buy his first tractor. Mr Bérard was ahead of his time: in 1984, he began farming his olive trees organically, and received certification in 1987. As his children did not want to succeed him and he knew that we, his closest neighbours, dreamed of producing oil, he sold us this plot of olive trees, vines and woodland in early 2019, at the age of 87. We carried out considerable pruning and land preparation, which prevented us from producing oil in 2019. Our maiden vintage is thus 2020. 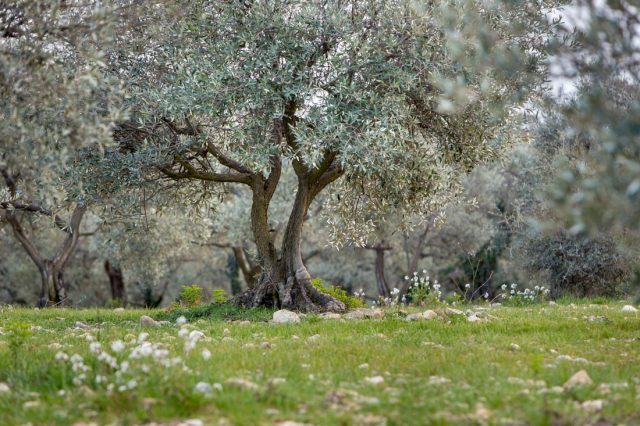 Nyons olive oil is defined by green-apple and nutty aromas and a buttery taste, sometimes laced with flavours of fresh hazelnut and fresh-cut grass. Yellow with green tints, this oil has little bitterness or pepperiness.